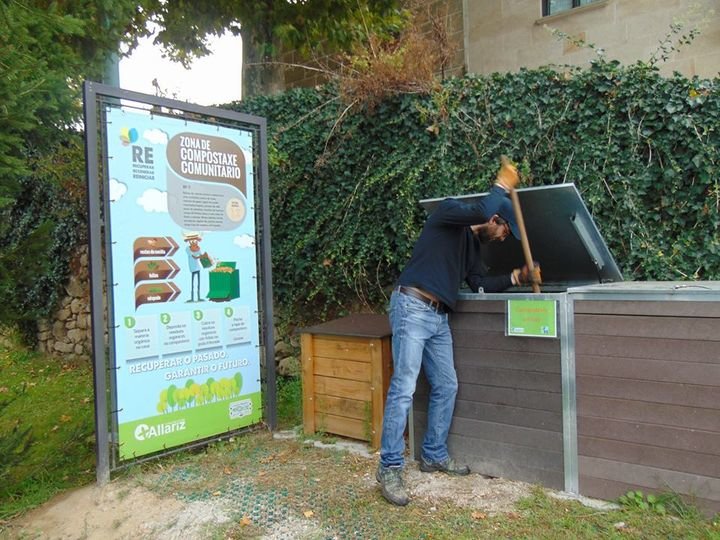 This experience cannot be properly interpreted without mentioning the socio-political background of the last decades in Allariz. In 1989, a fact, known by Allariz society as "the conflict", changed the tendency of the municipality and implanted a model of governance in which citizen participation is an essential axis.

The municipality covers an area of 85 km2 and has a population of 6100 inhabitants, scattered in 92 nuclei, the main one of which is the town of Allariz with 70% of the inhabitants registered there. In Allaríz, as in the rest of the municipalities of Galicia, MSW management consisted of separately collecting glass fragments, containers, paper-cardboard and waste. Glass and paper-cardboard were collected in the municipality by two private companies. Containers and refuse were collected and delivered by the Council to the company SOGAMA, which was created for this purpose by the Xunta de Galicia/Galician Government (51%) and Unión Fenosa (49%). This was done at the relevant transfer plant. Material from yellow containers, collected in a separate lorry from that which collects the rejection container, is taken to the SOGAMA transfer plant, where it is collected by ECOEMBES. Depending on the quantity of unsuitable containers (cardboard, glass, organic matter, plastic from industrial containers, ...), ECOEMBES accepts or does not accept the material and pays a sum to the Council for what it takes. Improving the separation is, therefore, very convenient both because it means an income for the Council, in concept of recycled containers, and because it reduces the amount that goes to rejection, which means an expense for the Council that pays SOGAMA to treat it.

The waste portion also contai organic matter (OM), which accounts for up to 46% of its weight. In the past, the waste was transported from the transfer plant along more than 100 km to the general treatment plant, to separate and recover waste material or to use energy through incineration. Amounts that exceed the plant's management capacity are buried. This represents approximately 30%. The municipalities, which have the legal competence to manage urban waste, pay SOGAMA 82€/Tm of waste treated by the company.

In 2010, Allariz City Council made a pilot project of OM composting, financed by the Ministry of Environment and Rural and Marine Affairs in collaboration with Novotec. It involved 42 units: 35 families, 5 institutions, a hotel company and an association.

In 2005, the Allariz Area Biosphere Reserve was declared as part of UNESCO's MAB Programme, comprising the municipalities of Vilar de Santos, A Bola, Rairiz de Vega and Allariz. In the Action Plan for the biosphere reserve (RB), a number of points refer to the improvement of municipal waste collection services and the extension of selective collection networks and, specifically, the promotion of organic waste composting.

Moreover, the EU states that, by 2020, 50% of all MSW must be recovered or recycled. Bearing in mind that 46% of MSW waste is OM, if this 46% is not treated it will be impossible to achieve 50% recovery or recycling.

At the end of 2014, as a result of this set of circumstances and considerations, the municipal government proposed a change in the management of organic matter, encouraging composting, and improvements in the management of other waste (paper-cardboard, packaging, etc.) in order to make Allariz "a model council" in waste management. The initiative is presented to the residents of Allariz and to the media as a RE Project for MSW management: REcover, RExenerar, REinitiar, with the slogan "Recover the past, guarantee the future.

Objectives of the project RE:

We work differentiating three types of the population to which the project is directed:

Advancing in the objectives set by the Council, by the end of 2016 22 compost islands had been installed in the Villa de Allariz, there were 360 green containers (waste), 165 yellow containers (packaging) and 800 litres of rear loading, 56 glass and 28 paper-cardboard.

In the urban environment implementation was gradually carried out by each zone. The determining factor, once the joint compost island was established, was the door-to-door campaign, because a personal commitment was established. Working person to person, giving the necessary explanations, breaks down many barriers, such as: “I don't know how to do it", "this seems very complicated to me"... Experience, in this case, shows that generic campaigns have little effect on citizens when it comes to changing habits.

According to estimates, it can be said that the initiative has begun to be implemented and is being taken on by 40% of the population, but the process must continue because there is a long way to go to the goal that is being sought: separation of 80% of the USW produced in Allariz. Throughout the year 2017 visits will continue to speak with those who were not at home during the first round or who are new to the area. There is about 60% on which to work further.

You can find more interesting information about this experience in the complete project here: https://www.dialogosrb.es/assets/experiencia-allariz.pdf

Grupo 2
SOVEREIGNTY. where are you involved exactly?: 3. Energy   3.3. Waste Management
TOOLS. how are you doing it?:
WHO. who is promoting it?:
Contact Information
Address:
Allariz, España
Email: medioambiente@allariz.com
Listing Tags: compost
Menu